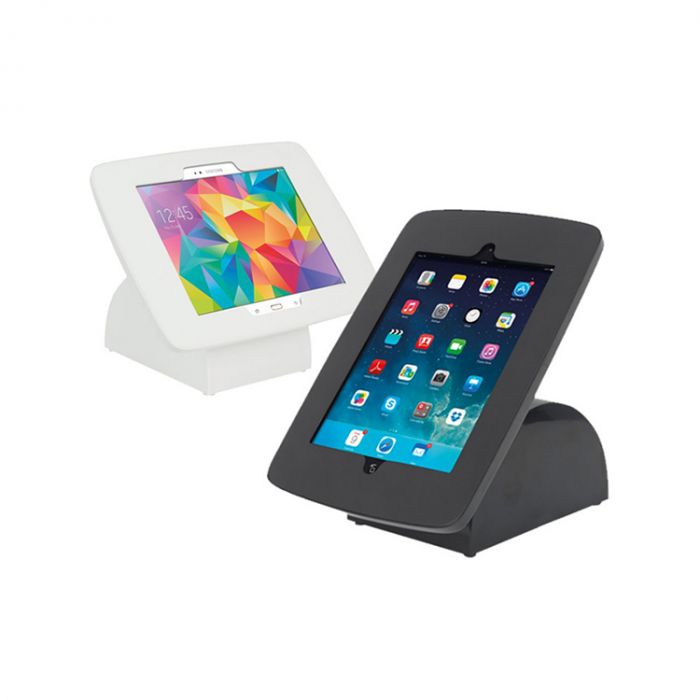 The Moonbase Tablet holder features a distinctive, modern appearance and is designed for use with Apple iPad or Samsung Galaxy tablet devices. It is the ideal solution for displaying your tablet device in point of sale retail environments, at exhibitions and events or even in the home or office.

The clever design of the enclosure allows the screen to be swung 45 degrees (from one side of the base to the other) and the screen can also be swivelled up to 330 degrees too. This is extremely useful if you want to screen share (for example, if two individuals are sitting on opposite sides of a table!). Your charging cable can be discretely hidden inside the holder for neatness.

The Moonbase Tablet Holder is available in a choice of Saturn black or stardust white colours and features a weighted base that provides great stability when used on any flat surface such as a desk or table. It is also possible to securely mount the holder using the 4 mounting holes on the base.

We have 3 x models of Moonbase tablet holder - please see compatibility list below and select relevant model when ordering. Unfortunately, we cannot guarantee the compatibility of this product with devices other than those listed.

Please note, the Samsung Galaxy Taba 10.1" cannot be used with the Moonbase holder